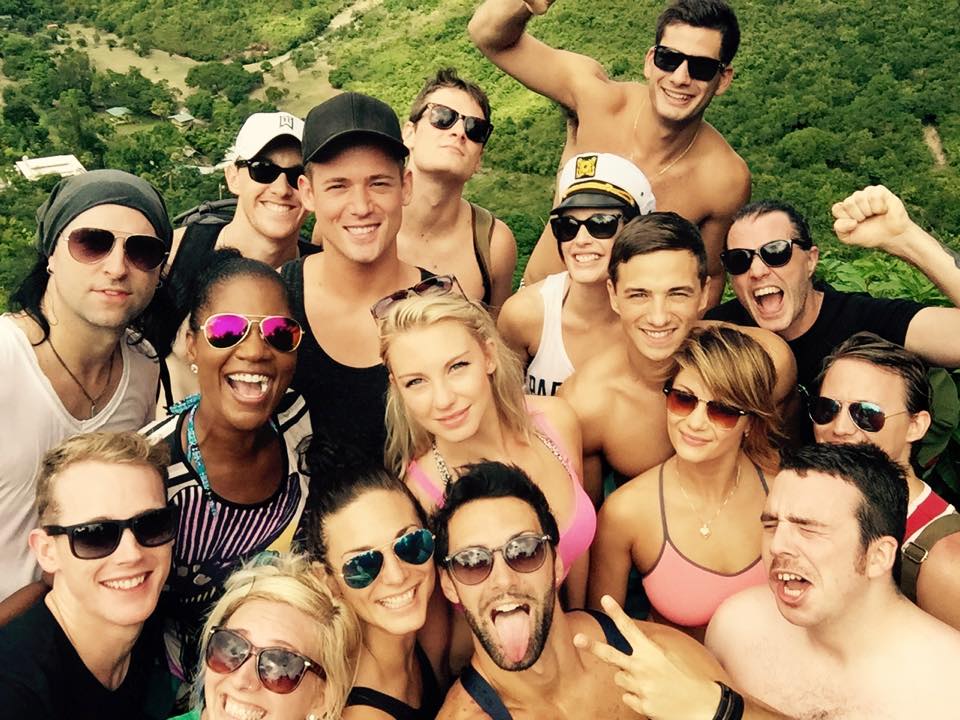 You might not know this about me. But, before I became a blogger and a floral arrangement enthusiast (that’s what my Linked In profile says anyway), I was a professional dancer.

After almost 20 years of being a competitor I joined a dance company, which was kind of like joining the circus, and I loved it. I lived on a cruise ship between New York, Miami and the Caribbean. I had a brilliant tan and a disposable income. (Sigh)

Each week I would recap of the events in a newsletter and send it back to my family. Eventually my readership grew and I ended up with 11 people on my mailing list. (Wow)

I found this old newsletter on my computer the other day and it’s honestly one of my favourite stories from my days as a professional dancer.

The story of: ‘Zoe and the Drumstick’ (Favourite!)

I’ve always known this deep down in my heart, but it wasn’t until yesterday that it was confirmed to me. I will never make it as a hip hop dancer.

I have been asked to attend a private Pyjama Jam rehearsal (click HERE to check out a vid from a Pyjama Jam “performance”), and to my knowledge this is the first time this has ever happened. As I’m possibly the worst Pyjama Jammer there ever was. I’m not that upset about it and I could really benefit from another rehearsal as I have absolutely no bloody idea what I’m doing. Everyone else, however, finds it very amusing and I secretly think they are hoping they can use my lack of talent to get themselves out of having to do this event ever again.

Anyway, I do the rehearsal the night before and then I get up early the next morning, put my hair in pig tails, have a coffee and manage to wear the wrong shoes. The first step I have to do is a grape vine. I look over at Gary (my PJ Jam partner) to get the music cue: ‘…5678’.
Wrong foot.
I’m surely getting fired.

I spent a very cold NYC day, firstly, by hitting the Aussie cafe in the West Village with the Aussies and then having a visit with LK (my mate from Ballarat High School). This is the first time I’d seen her since her trip home for Xmas. We talked all things Ballarat, life planned (mainly LK’s life not mine), ate cheese, lost an iPhone, found an iPhone and then I spent the $200 I had found in the side pocket of my handbag earlier that day… not entirely on cheese. I do realise that the days of spending $50 on a Christian Dior mascara are limited, but I also think while they are here I might as well make the most of them. LK and I agree to meet up again in two days when I’m back in NYC to further life plan. When I arrive, 2 days later, it’s raining and LK is pretty hungover so we decide to just get mozzarella sticks, go watch a movie and see what cheap jewellery we can find in H&M that will greatly improve our social lives. Life planning can wait.

The steel walls of a cruise ship see many a ship-mance and there is never any judgement about whom you may choose to be your significant other during your time onboard. And there is many good things about having a “Boat Boyfriend/Girlfriend”. For example there is always someone to remind you to leave a tip at a restaurant (and do the 15% calculation for you). Borrow their couch, window and tv that is so far away that you need to wear your glasses to see. But I think I’ve discovered the best advantage of having a ship-mance is that you get a couples discount on haircuts. Brilliant.
My favourite thing that happened all week was in the show on the last day of the cruise. It had been rocky (bad weather) the night before so we had moved our show to the following day for a matinee. Which actually worked out really well because a lot of the other entertainment staff can never see our show as they are also usually working in the evenings (when we our show is scheduled), so they all came along and cheered us on. It’s always great to have some support and you naturally always go a little bit harder when your name is being screamed or someone is holding up a sign that reads: “I LOVE YOU ABBEY”  written in glitter glue. This is yet to happen to me… but I’m sure it’s only a matter of time. The drummer (we have a live band on stage) was having a particularly good show as his Boat Girlfriend was in the audience and she’s bold, funny and sounds like a fog horn. Half way into the second number everyone is going to town and the drummer loses one of his drum sticks and it goes flying onto the stage. At one point it is between Robert’s (my dance partner) feet, but he is none the wiser and kicks it further down stage where it becomes an even bigger hazard. Luckily Zoe was able to pick it up. The best thing to do would have been to throw it into the wing, but Zoe was too far past the wing so she ‘gently’ threw it off the front of the stage. Well Zoe doesn’t know her own strength and I now believe her when she says “Red wine is good for you” because she threw it so hard it hit a lady sitting in the front row… in the head!

Due to my age, tanning schedule and recent lack of athletic motivation I have become the “bag lady” on every group excursion. I enjoy the quiet time and have a little sleep before making judgements about all the other people on the beach. I wonder if I will grow up to be like the uber tanned wrinkly skinned old lady, knee deep in the ocean clutching her tea cup shittypoo dog. Or if I’ll be the parent that ignores their kids while they argue and throw sand at each other. I do think that if I don’t start going kayaking or on roller coasters I am probably going to end up being demoted from a “bag lady” to a “cat lady”. I really hope that it is none of these options, but I do have a feeling it will involve me wearing pearls, telling stories about that time I lived on a boat, and I will no doubt be clutching a flask of whiskey. Or maybe have a still have bottle of wine stashed in my backpack, like I do now…